Rose Allshouse has been a life-long advocate for inclusion. Having grown up with a niece with Down syndrome she always welcomed special needs children into her classroom at Bushkill Elementary School. Later, she continued her support of ALL children and their inclusion as the principal of Lower Nazareth Elementary School where Mikayla (born with profound brain damage) was always included in regular education classrooms. Rose not only supported, but championed our crazy idea that Mikayla and her third grade friends could write and illustrate a book about becoming friends with someone with a disability. The book, Our Friend MIkayla, was first published in 2006, is now in its third edition, was gifted to every elementary school in PA, and has been read by and to children across the country and beyond. None of this would have been possible without Rose’s support. 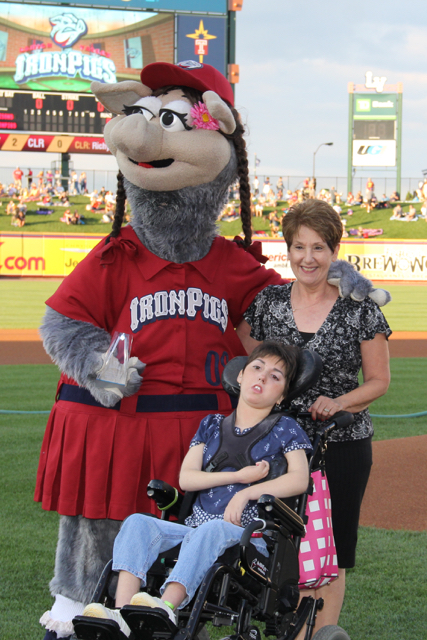 Motivated by the overwhelming success and positive impact of their book, Mikayla’s friends and family created a 501(c)3 non-profit organization to further inspire and empower kids of all abilities to share the meaning and importance of inclusion. As she had always promised, Rose agreed to help, was a founding member, and has served on the Board of Mikayla’s Voice for over five years, first as Vice Chair, then Chair, Secretary and now, Treasurer. Likewise, she has volunteered at every major event and served as the volunteer coordinator for our Tri for Inclusion.

Since her childhood, through her career as an educator, and now with her non-profit work with Mikayla’s Voice, Rose has been dedicated to individuals with disabilities and their inclusion in school and community. Before the IronPigs game at Coca-Cola Park this past Wednesday evening, August 26, 2015, Rose was honored as a Lehigh Valley Community Star! Her award was presented by Kurt Landes, Lehigh Valley IronPigs President and General Manager and was very well deserved, indeed. Many thanks, Rose and Kurt!

More photos may be found in our photo gallery. Click here to link directly.