Local non-profit organization hopes to send one copy of “Our Friend Mikayla” to every elementary school in Pennsylvania, and eventually the United States. 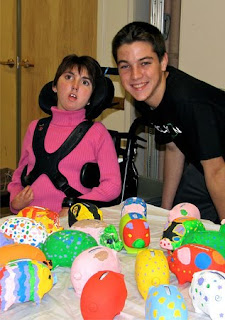 Six years ago, a 3rd grade class at Lower Nazareth Elementary School was given a project: to write their autobiographies.

However, one student in the class, Mikayla Resh, suffers from a severe form of cerebral palsy and cannot speak. Members of the class realized Mikayla couldn’t tell her story the way they could, so they decided to tell it for her.

From the assignment grew a book, which was published two years later by the National Inclusion Project, according to Logan Houptley, a co-founder of Mikayla’s Voice, a local non-profit organization that raises awareness about children with disabilities and inclusion.

Members of Mikayla’s Voice — including Mikayla’s mother and sister — are actively raising funds in order to send one copy of the book, titled “Our Friend Mikayla,” to every elementary school in Pennsylvania, and eventually the United States, according to Houptley, now a freshman at ﻿Nazareth Area High School﻿.

Kim Resh, Mikayla’s mother, said she loved the idea of the book, but realized that getting it published was another story.

“I think the true believers in the room were the children,” she said. Despite her own doubts, she always felt that “it’s important to empower kids that they can make a difference.”

The postage alone to mail the books across Pennsylvania will cost $5,000,Resh said. More funds will need to be raised to cover additional costs, like printing.

To date, the non-profit has received $11,500 through grants from Wal-Mart and the ARC of Pennsylvania. ARC is an organization that helps promote understanding of people with disabilities, explained Resh.

Members of the organization have come up with several creative ways to raise funds themselves.

A student-led organization, members have helped out the carhops at Sonic Drive-in, but not on roller skates, according to Houptley, a longtime friend of Mikayla’s.

Proceeds from every cherry limeade slush — Mikayla’s favorite — sold during the month of April at the Lower Nazareth Township restaurant is being given to the local organization.

Lady bug logo pins and pendants, in addition to artwork created by Mikayla and her classmates are also available. One of the 8×10 prints is titled, “The Road to Helping Hands.”

The mission of Mikayla’s Voice is to inspire children of all abilities to share the message of inclusion, according to Resh. Her second daughter, Lauren Resh, puts it a little differently.

“Mikayla’s Voice is really just trying to get the message out that disabilities aren’t scary,” said Lauren, a 7th grader at ﻿Nazareth Area Middle School﻿. “A lot of people don’t know that.”

On May 28, Mikayla’s Voice will attend Community Night at Coca-Cola Park to raise awareness about disabilities and inclusion, Resh said.

If you plan to attend, members of Mikayla’s Voice will be sitting at a red table that looks like a lady bug. The lady bug is incorporated into the organization’s logo, which Lauren designed. She and her mother chose a lady bug because they are quiet, peaceful, and don’t hurt anyone, kind of like Mikayla, the girls’ mother said.

Mikayla can see bright colors like red and yellow, according to Lauren. Lady bugs are red with, normally, black spots, but Lauren put one bright yellow spot on the lady bug to make it different from all other lady bugs – different, but still part of the group.

Houptley has been friends with Mikayla since the third grade when he moved into the Nazareth area. She was one of his first friends at his new school, said Wendy Houptley, the teen’s mother.

“I don’t remember exactly [how I met Mikayla]; she’s always been my friend,” he said.