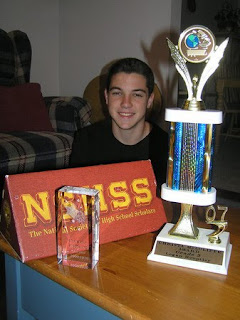 Logan Houptley’s passion to educate others about children with disabilities drives his ambition.

Logan Houptley has done more in the last five years than most people do in a lifetime.

A freshman at Nazareth Area High School, Houptley participates in sports and political clubs, is an active volunteer in his community, attends multiple leadership conferences, and leads a non-profit organization. In November, he was one of the main speakers at a national convention in Florida for ARC of the United States, an organization that protects the rights of people with disabilities.

“I try my best and see where life takes me,” Houptley said.

So far life and hard work has taken him to leadership conferences and public speaking opportunities. Since elementary school, Houptley has been active in educating children about other children with disabilities. It was in the third grade that he became best friends with Mikayla Resh. Mikayla has a severe form of cerebral palsy, Houptley explained. She is not able to speak and has limited movement.

Wendy Houptley, Logan’s mother, said, “When Mikayla hears his voice, she wakes up and her eyes light up.”

After Houptley moved into the district, she was his first close friend at his new school, Wendy said. He never saw her as a child with disabilities. He only sees her as a child like everyone else – a friend.

“I don’t remember exactly; she’s always been my friend,” Houptley said. “I was raised to do the right thing and respect everyone. I don’t like to leave anyone out. I feel that if anyone left me out, I wouldn’t want that.”

After the friendship blossomed, Houptley became active in educating others about including children with disabilities. His first project with his classmates was a book titled “Our Friend Mikayla.” He is now an active junior board member of Mikayla’s Voice, which he co-founded with Kim Resh, and Mikayla’s sister, Lauren Resh.

As part of a confirmation community service project, Houptley organized a piggy bank decorating contest. Children decorated the pigs, which were then auctioned off to raise money for Mikayla’s Voice. He raised more than $1,000 for the cause, he said. All of the funds are being used to produce and promote the book, with the goal of getting it placed in every elementary school library.

“You just have to put yourself out there and don’t hold back,” Houptley said. “Oh, and get to bed on time. It’s exhausting.”