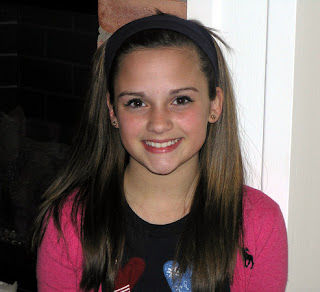 “No” isn’t a part of Lauren Resh’s vocabulary, at least not in the sense of something being impossible to do.

“Disabilities aren’t scary,” Lauren Resh said. “Mikayla’s Voice is really just about trying to get that message out.”

Named co-president of Best Buddies for the 2011-2012 school year.
At the USA-International Gymnastics Clubs Competition in 2009, she won second place on the balance beam and eighth place overall, both in her age group.
Designed the logo for Mikayla’s Voice.
Key to Awesomeness (What made her successful?):

At school, Lauren continues her work in helping children with disabilities through the Best Buddies Club. As a member of the club, she helped organize and raise money for an upcoming trip to Dorney Park & Wildwater Kingdom.

With help from her mother, Lauren submitted a letter describing the Best Buddies Club and the upcoming amusement park trip to Just Born, Inc., in Bethlehem.

Lauren and her mother put together a grant request to the local company, which awarded the club $2,000 to purchase 400 T-shirts with “Wouldn’t life be boring if all your PEEPS were the same?” printed on them. Of course, PEEPS chicks and one PEEPS bunny are featured on the shirts.

The club kept enough T-shirts for Best Buddies Club members and sold the remainder for $15 each. The club made a $3,750 profit, according to Lauren’s mother, which was enough to pay for the Dorney Park trip.

Next school year, when Lauren will be the the co-president of Best Buddies, she’s thinking bigger: Disney World. Her mother encourages her, but is realistic about the cost and limitations.

This is one 7th grader who sees possibilities in obstacles.

In school, math is Lauren’s favorite subject. Why? Because “I’m good at it,” she replied. Lauren dreams of being an orthotist — a person who works in the field of prosthetic limbs — when she grows up.

“I think it’s really interesting,” Lauren said. “A lot of people would be scared of that, but I’m not because I’ve seen a lot of that.”

So what is the reason for her success? Lauren’s response is “definitely having an open mind. If you don’t have an open mind, you can’t accomplish anything.”