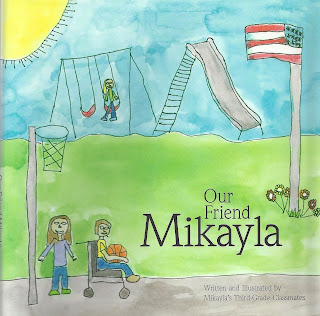 When Mikayla was a third grader at Lower Nazareth Elementary School she and her classmates did something quite extraordinary.

Motivated by her belief that children often could offer the best explanation to other children, Kim, approached Mikayla’s principal and teacher and asked them to let her help Mikayla’s friends write and illustrate a book about having a friend with a disability. Both being advocates of inclusion, they agreed.

The class had just written autobiographies and since Mikayla was unable to write her own, the children were very eager to help Mikayla tell her story. After several class discussions concerning Mikayla’s disabilities the children wrote paragraphs about what they understood. There were 75 thoughtful essays and wonderful illustrations depiciting their feelings and interactions with Mikayla. Kim used the children’s work, and by embedding their phrases and sentences, Mikayla’s classmates’ work became an outline for the book, Our Friend Mikayla . The book wrote itself.

Our Friend Mikayla was published in late 2006 with the financial support of The National Inclusion Project, founded by Clay Aiken.

Mikayla’s Voice would like to see the book in every elementary school across the country.

In keeping with the mission of Mikayla’s Voice, … inspiring kids of all abilities to share the message of inclusion, Mikayla’s Voice would like to work with other groups of children to develop additional books written and illustrated for children by children. This has the potential to become a series of “Our Friend…” children’s books with each telling the story of a child with a different type of disability.

“Our Friend Mikayla” (and two other books written by children for other kids about having a friend with a disability) can be purchased through Mikayla’s Voice online store.