The Morning Call Publicizes the Tri For Inclusion 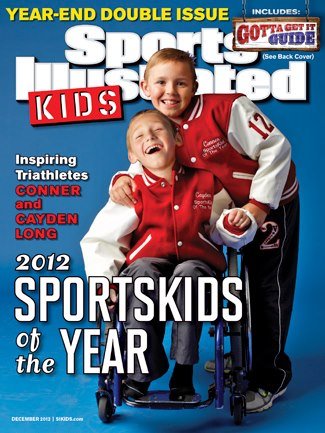 Saturday competition is for kids with and without disabilities. ‘No one will have to sit on the sidelines.’

When Conner Long was 7, he dreamed of running and biking with his little brother Cayden. However Cayden, then 5, had been diagnosed with spastic cerebral palsy and was unable to walk or talk.

That didn’t stop his determined brother. When Conner heard about a triathlon for kids in 2011, he asked his mother why the siblings couldn’t race together as a team. Team Long Brothers was born.

Conner pushed Cayden in a stroller as he ran, pulled him in a trailer behind his bike and on a raft behind him as he swam in the Nashville Kids Triathlon. The brothers from Tennessee may have finished last, but they finished.

On Saturday, they will join other children in the Tri For Inclusion at Parkland High School.

“We were inspired by the Long brothers,” says Kimberly Resh, a mother from Lower Nazareth Township who organized the Tri For Inclusion.

Her 18-year-old daughter Mikayla is unable to walk or speak because she has brain damage and cerebral palsy. Resh started a nonprofit organization, Mikayla’s Voice, to spread the message of inclusion for children with disabilities.

“I think it’s going to be an amazing event,” she says. “It’s important it be an inclusive event and not just for special-needs children.”

The Tri for Inclusion will have more than 100 children with and without disabilities competing. The mini-triathlon includes a 100-yard swim, a 3-mile bike ride and .625-mile run. Children may be assisted by another person or can even take part in a relay.

“We are all about inclusion,” Resh says. “I haven’t met a child yet that we couldn’t find a way for them to participate. This is something many families have never imagined doing.”

On Saturday, children with blindness, autism, cerebral palsy, Down syndrome and spina bifida will join more experienced athletes in the Lehigh Valley’s first Tri For Inclusion. One competitor is on a ventilator.

Another high-profile athlete with disabilities joining the event is Noga Nir-Kistler of Salisbury Township, who won a bronze medal in the 100-meter breaststroke at the London Paralympics games last year.

Nir-Kistler has a nerve disease that left her paralyzed from the waist down since the age of 21. She began swimming and made the USA Paralympics swim team. She will hand out medals, and has offered to pull a child in the swim.

“I help people be at their best by setting an example,” she says. “When they see what I am able to accomplish, they stop looking at the wheelchair and start looking at the person.”

Athletes from the Lehigh Valley Conference Student Athlete Character Council have volunteered to assist children. Cetronia Ambulance volunteered to have an emergency crew on standby.

“I have more kids that want to help than kids who need them,” Resh says. “It’s an incredible outreach of the whole community.”

She encourages children without disabilities who are new to triathlons to take part in the event.

“Try a tri,” she says. “A varsity athlete can be next to my Mikayla. This is an inclusion triathlon for absolutely all children across the Lehigh Valley with or without disabilities. No one will have to sit on the sidelines.”

Every child participating will get a finisher medal. There also will competitive medals for top finishers.

The Tri For Inclusion is the second major event organized by Resh and Mikayla’s Voice.

For the past two summers, Mikayla’s Voice has hosted Elevation Celebration at Coca-Cola Park. The event features Michael Glen, the world’s first paraplegic hot air balloon pilot, who comes from Arizona to share his story with children with disabilities. After he was paralyzed in a car accident, he continued to pursue his dream and became a pilot. During the event he gives tethered hot air balloon rides to the children to remind them anything is possible.

See the article published in the Morning Call here:
http://www.mcall.com/entertainment/kids/mc-tri-for-inclusion-parkland-triathlon-20130623,0,2300502.story#ixzz2WzUJC5Iv